As the final stage in the localization process, LQA (localization quality assurance) is crucial to the delivery of a polished game. But ensuring language quality also takes time — which means it’s often rushed or skipped entirely. With Gridly, Angry Birds creators Rovio were able to quadruple their LQA productivity and get game updates out faster. Here’s how they pulled it off.
Localization
Case Study
02-21-2022  |  Ivan Belcic

By manually playing Rovio’s game Small Town Murders, testers managed to check up to 250 strings daily within the game’s playable code. When testers were given screenshots to check instead, their productivity jumped up to 600 or even 700 strings per day. But with Gridly, Rovio empowered their testers to check approximately 1,000 strings per day.


Rovio created a script within the Unity game engine that automatically generated in-game screenshots, then uploaded them to Gridly. Testers were able to instantly compare the text string to the screenshot within Gridly, make corrections, then generate new screenshots to confirm.

Traditional LQA is a time-consuming process that requires testers to play games and use cheat codes or keys to move between areas in the game. When a tester spots a language inconsistency, they’ll need to pause the game, take a manual screenshot, upload it, log the issue, update the text file, then link the screenshot to the relevant string.

Testers waste time bouncing between text spreadsheets and screenshots, often kept in ZIP files or cloud storage — reviewing screenshots one by one, comparing to the text, then logging any errors. After the entire localization quality check is complete, devs must re-import all the updated text into the game.

Rovio collected both screenshots and text within Gridly, enabling testers to perform their work all in one place. By automatically tracking and highlighting any changes, Gridly makes it easy to instantly evaluate the status of any given string.

Compared to storing strings in Google Sheets or Excel files, Gridly handles localization quality management in a fraction of the time.

How Rovio automated LQA with Gridly

Rovio’s game developers created a Unity script that auto-generates screenshots from Small Town Murders. Each screenshot is linked to the text string that appears in that image. Rovio used this tool to generate screenshots for the portions of the game requiring LQA. This process can also be run outside Unity as well.

We’ll illustrate this process with an English-to-Spanish translation quality evaluation. Here’s how it works.

Step 1: Import English text and screenshots from Unity to Gridly

First, the English text is imported from Unity into Gridly. Rovio’s screenshot script then automatically captures a relevant screenshot for each string and uploads the images to Gridly, where they’re displayed alongside the text. Testers can review for any errors or inconsistencies.

It’s easy to customize Gridly’s interface and make text-to-screenshot review easier. Viewing only the source text, source screenshot, and a column for feedback means that testers won’t be distracted by irrelevant data while they work. Any strings added later will be automatically added and flagged as needing review.

With Gridly’s Unity integration, completed texts can be instantly pushed to the game. As a final step, create custom fields to track issue statuses, report bugs that should be addressed with further screenshot passes, or create LQA approval checkboxes. Filter accordingly to quickly identify any remaining issues.

By integrating their screenshot tool with Gridly, Rovio empowered their LQA testers to check four times as many strings as before — turbocharging their localization management system for a much faster turnaround.

Here’s how the entire process looks, including an initial translation pass: 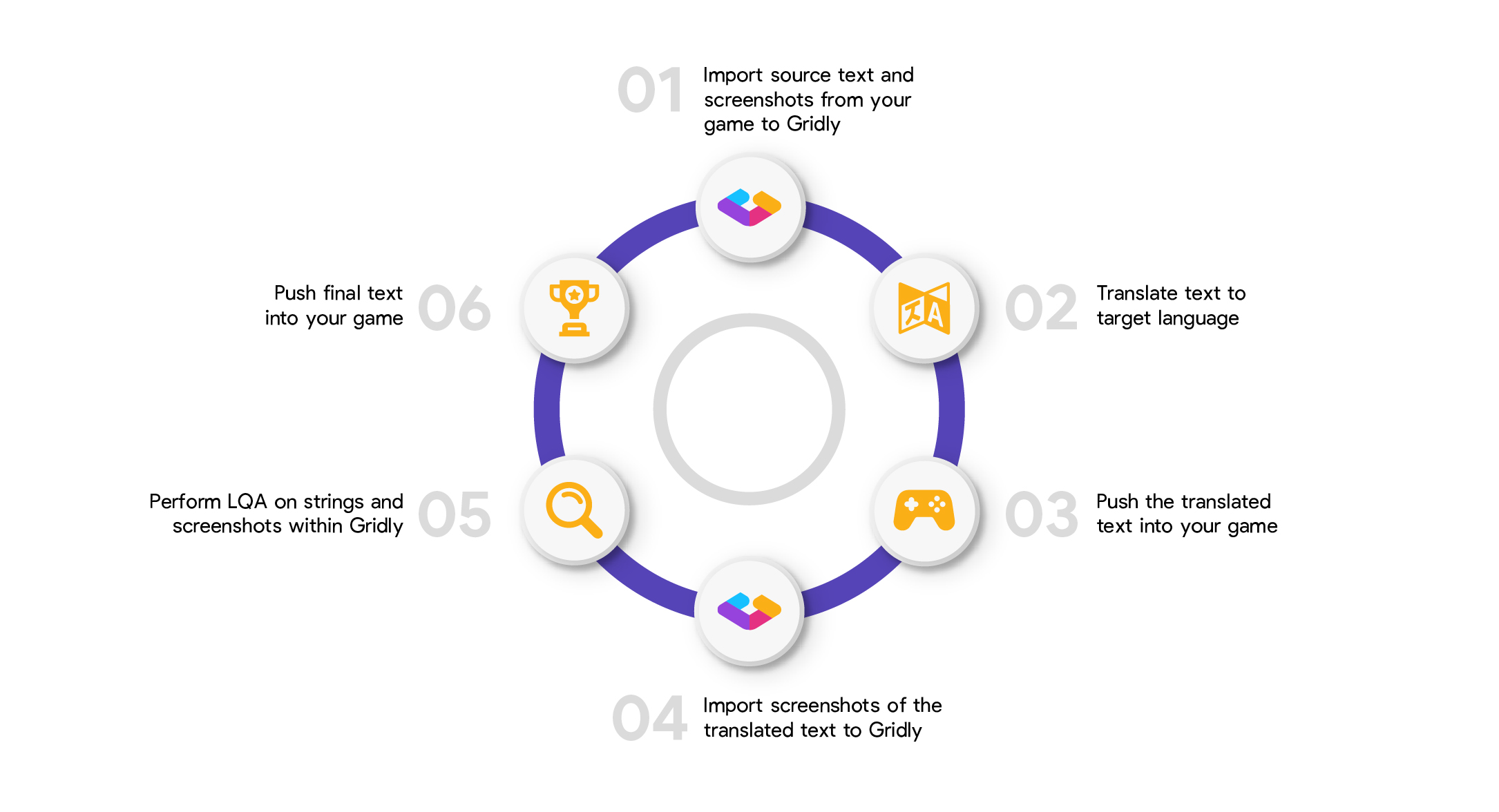 
How else can Gridly help with LQA optimization?

As an LQA streamlining tool, Gridly’s benefits aren’t just limited to screenshot checks. Here’s how Gridly can shave even more time off the LQA process.

With all the screenshots in Gridly, it’s easy to review them for story consistency. Rovio’s team could check their game for narrative consistency, then leave comments for writers if needed.

An automated screenshot tool can capture every possible variation of text within every UI (user interface), then import them into Gridly for convenient LQA. When creating a new UI, implementing it first into an LQA screenshot tool will allow the tool to automatically run this new UI through the same process.

Many localization providers use CAT (computer-assisted translation) tools like Memsource and memoQ as their primary translation management system. Integrate Gridly with memoQ or connect Gridly directly to Memsource with built-in plugins for even smoother LQA.

By connecting their automated LQA screenshot tool with Gridly, Rovio enjoyed a fourfold productivity boost that enabled them to push game updates out faster to their players. Ready to replicate their success? Get started with Gridly today.