Did you know that over half the world’s gamers play on their phones? Mobile gaming is stronger than ever, and 2023 is shaping up to be a very exciting year. From the use of games as a social platform to the dominance of both hyper-casual and esports games, these are the top mobile gaming trends for 2023.
gaming
11-04-2022  |  Ivan Belcic

The COVID-19 pandemic drove people inside and left many cut off from their typical social venues. In response, many turned to games as a social outlet — and given the ubiquity of smartphones around the world, mobile gaming responded accordingly.

Rather than use social platforms like Messenger and Discord while they play, mobile gamers want the games they play to fulfill their social needs. That’s why mobile game development in 2023 will see even more of a focus on chats and hangout lobbies, co-op and PvP modes, guilds and other organizations, and social network integration.

Projected to grow at a CAGR (compound annual growth rate) of 11.9% from 2022 to 2026, the online gaming market is showing no signs of slowing down anytime soon.

2. NFTs, the metaverse, and GameFi

The metaverse is touted as a persistent digital world in which players can interact with each other and use unique objects they’ve purchased as NFTs. While these concepts still have much to prove in terms of their long-term viability, that hasn’t stopped mobile game developers from trying.

The GameFi model of game design purports to financialize gaming by allowing players to earn virtual currency as they play — an approach known as P2E, or play to earn. While the once-popular P2E game Axie Infinity has seen the value of its tokens plummet after an initial surge, it won’t be the last attempt in this model.

On the other hand, Fortnite’s series of live in-universe concerts and other events demonstrate that metaverse-type gaming still holds a considerable appeal. Expect to see more metaverse and blockchain projects as a 2023 mobile game development trend.

With simple controls and designed to be played in shorter sessions, hyper-casual games appeal to a much broader market than traditional single-player games, tricky puzzle games, or esports games like League of Legends. Hyper-casual gameplay is fun and relaxing without the stresses of complex gameplay or intense competition.

Hyper-casual gaming represented nearly 45% of mobile game installs in 2021. Many of the most popular games are hyper-casual games — such as Among Us, which exploded in mid-late 2020 largely thanks to its popularity with streaming audiences.

US congressperson Alexandria Ocasio-Cortez streamed her Among Us game with fellow representative Ilhan Omar and others to an audience of 430,000 viewers on her Twitch channel. The universal appeal of hyper-casual games transcends genre boundaries and makes them something many developers will want to explore as a 2023 mobile gaming trend.

4. Mobile esports for playing and watching

Streaming platforms like Twitch have mainstreamed to the point where it’s just as normal to watch someone play a game as it is to binge your favorite series. Game streaming will reach one billion viewers in 2023, and esports viewership is projected to reach nearly 30 million views per month by the end of 2022.

Combined, these figures indicate the massive potential for mobile esports amongst streaming audiences. Mobile game developers will look to integrate Twitch into their games, making it as easy as possible for streamers to play their games in front of global audiences.

The boom in game streaming makes mobile esports as both gaming and entertainment alike one of 2023’s most promising mobile gaming development trends. 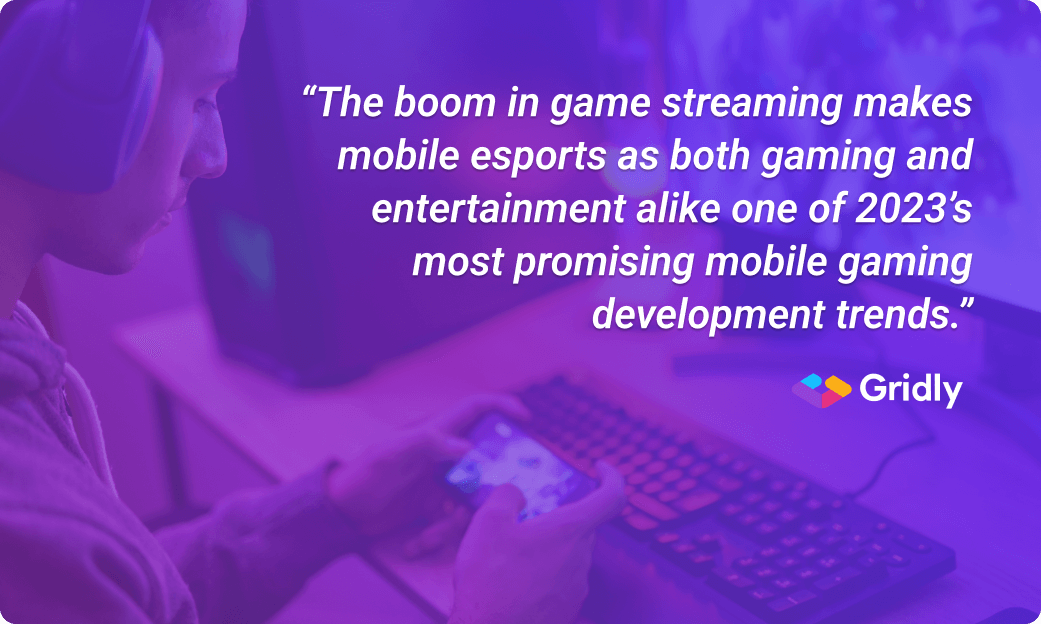 Cloud-based games differ from traditional games that get installed on a player’s device. Instead, players stream the game over the internet. While cloud-based gaming isn’t new, two more recent innovations are fueling its dynamic growth: edge computing and 5G networks.

Edge computing enhances cloud services with edge nodes that shorten the distance between game servers and players’ devices. This reduces latency — the time it takes for data to travel between two points. Combined with the high speeds and already-low latency of 5G networks, edge computing is poised to take cloud gaming to new heights.

LiveOps, short for live operations, is a gaming model that allows developers to add and update games post-release. LiveOps goes beyond patches and DLC and represents an ongoing model of game maintenance and content delivery.

With LiveOps, game developers can add content and create new opportunities for player engagement and monetization without having to release a brand-new game. It’s the engine that fuels the GaaS model. And with cloud gaming set to become one of 2023’s hottest mobile gaming trends, developers will need to master LiveOps to ensure their games stay fresh and continue to engage and attract players.

Many of the top mobile game development trends of 2023 are centered around the GaaS model. Games as a social medium need longevity to cement themselves in players’ daily lives as a place to hang out, while esports games rely on steady streams of new content — characters, maps, items, and more — to keep players coming back.

Gridly is a centralized content platform that integrates with your game engine and enables you to manage content at scale. And when it’s time to bring your game to new markets, its built-in localization tools and features enable you to localize content as it’s created, getting you to market faster in all the regions you’re targeting.

Stay on top of 2023’s mobile gaming development trends by anchoring your development cycle in a dynamic and flexible content management platform. Find out more about how Gridly can boost your workflow:

>» See what you can do with Gridly’s API