Agile vs Waterfall Localization in Game Development: Pros, Cons, and How to Do It Right

Localization is an integral part of the software, app or game development lifecycle. While software dev methodologies have already gone Agile, localization, by and large, is still an afterthought. In this article, we’ll take a look at agile and waterfall methods and discuss the best practices on how to incorporate localization into your development workflow.
Localization
12-01-2020  |  Ted Hagos

If you are working in software, app, or game development, for sure you came across Agile or Waterfall methodologies. Before jumping into the localization specifications, let’s briefly overview them.

What is Waterfall model?

Waterfall is a software development methodology in which the major activities (requirements, design, coding, and testing) are done in phases and executed serially. Each phase is gated, and it’s not possible to get to the next phase without fully completing the previous phase. This brought a sense of organization and engineering into software development. It would have worked wonderfully if we can fully define all the requirements before starting the coding phase; alas, this wasn’t true. This still isn’t true for many projects.

Waterfall methodology brought frustrations to many projects. It had such limitations as:

What is the difference between Agile and Waterfall?

Agile methodology came to life because of the shortcomings of the waterfall methodology.

In contrast with waterfall, Agile practice does not require all the software’s feature details to be defined at the outset. Instead, it focuses on the frequent delivery of working software. It documents the requirements to the extent that’s good enough and specific enough for coding to begin.

It’s common for Agile teams to time-box two weeks (sprints), implement as many features as they can within it, then show-and-tell. Then, go at it again for another two weeks, show-and-tell, rinse, and repeat, until all the features have been implemented. This time-boxing practice became known as a “sprint”. The idea is to produce a working build every two weeks, work out the kinks until everyone is comfortable with the stability and features.

The basic tenets of Agile can be described in the Agile manifesto:

The Agile movement took the software development world by storm — you can tell by the number of consultants who hung shingles offering Agile consultancy services — but localization remained an afterthought. To be sure, the dev teams went about their stand-up meetings, sprinted fortnightly, and breezed through every show-and-tell; but they still did the localization after all the features had been implemented. Not during.

A typical workflow for game development teams using the waterfall method is as follows:

This is what localization looks like in the waterfall approach. 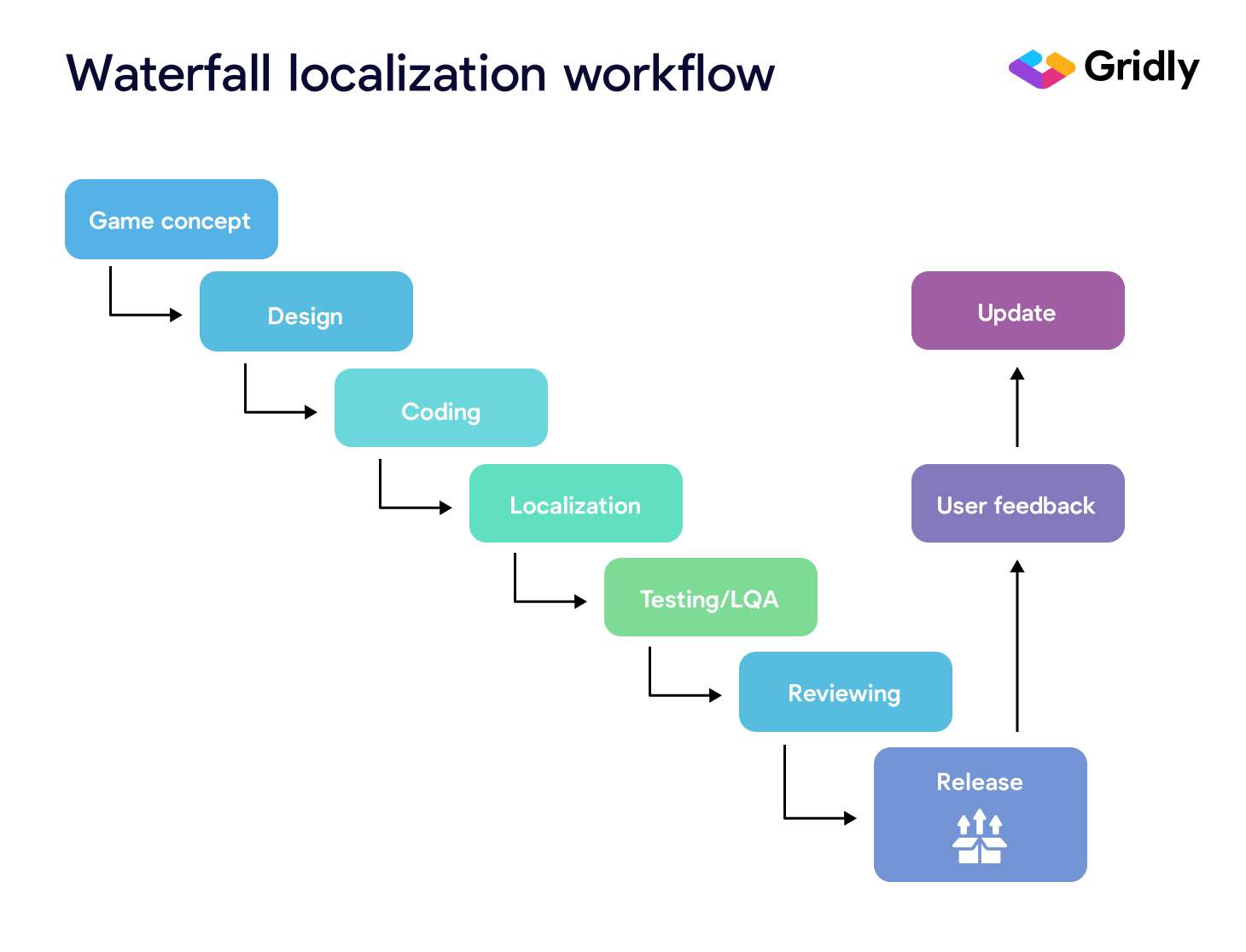 It looks nice and organized, don’t you think? Each phase cascading to the next in an orderly way, but it hides lots of problems.

To make matters worse, many dev teams still don’t employ proper tooling for localization. They may have gotten down their CI/CDs, hooks on source control, code coverage tools, and other DevOps bells and whistles, but they’re probably still managing their resource bundles manually. That’s problematic in many ways: 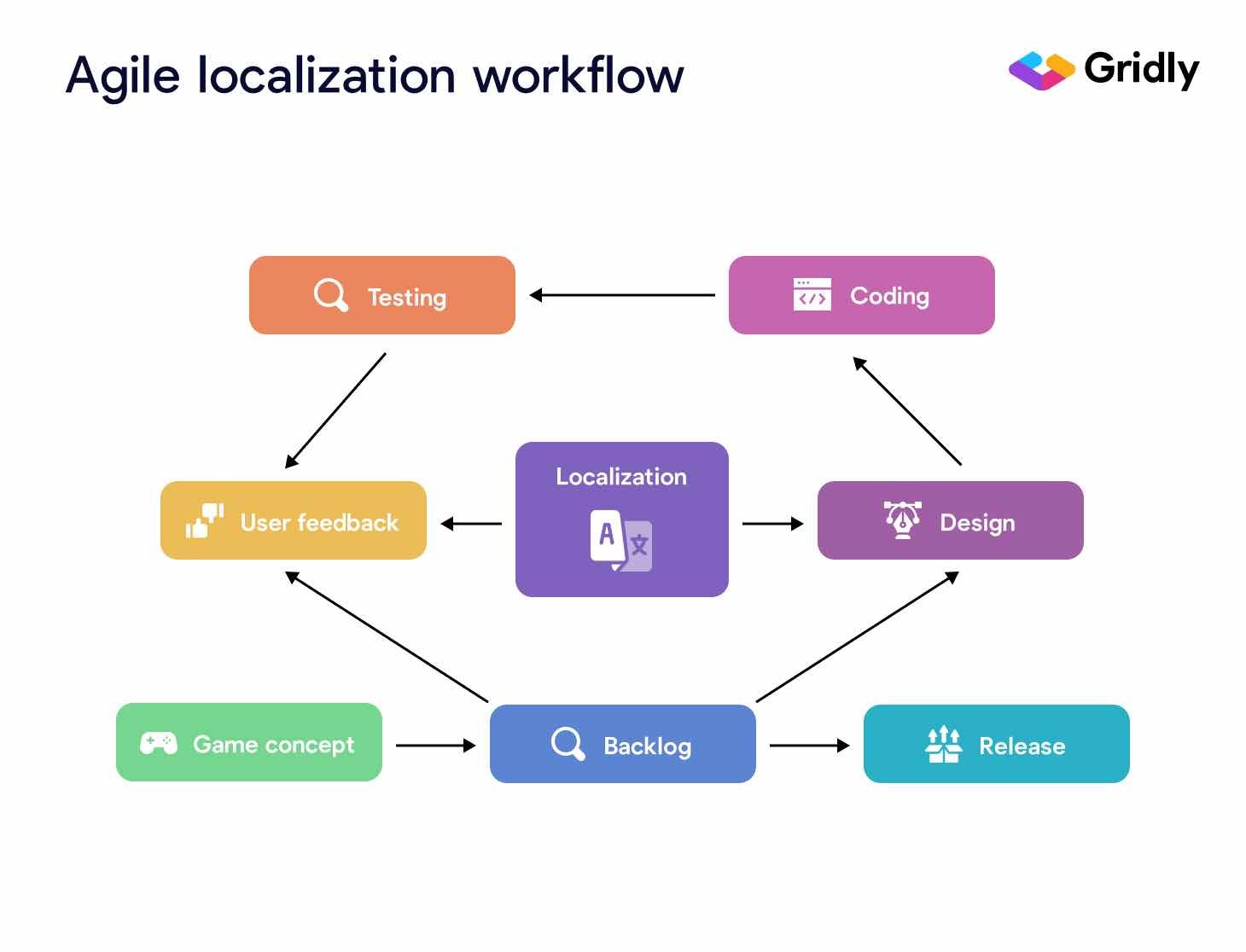 It will be front and center of your development efforts. In an Agile workflow, everyone works on their tasks, but there are no gated phases. Just pick up work when you’re able. The changes are done in short intervals.

Agile localization syncs the localization process with the development process. They operate simultaneously. You will need tooling to accomplish this; a spreadsheet like Gridly with a focus on localization should do the trick.

The Agile localization process can then be done as follows:

That’s how an Agile continuous localization workflow might look like. It’s easy to fall in love with it because:

When choosing a solution for localization

So, you’ve already been converted and now sees the light of Agile localization and the benefits of localization tooling. What to look for then? Well, let’s start with this list:

Which one is right for you? Agile or Waterfall?

Agile is more suitable if the following is true for you:

Agile, great as it is, may not be for everyone.

A point to consider for waterfall is if the project has a fixed scope and budget; you can’t do Agile if this is the case. Some teams may not be co-located in an office; they could be dispersed. It will be challenging to implement Agile when team members are across time-zones and regions.

If your team should be in constant communication with its customers, you can lean towards Agile methodology. Still, if you have limited access to the users, then you can’t get very good feedback — which Agile depends on heavily — then the waterfall method may be better suited for your team.